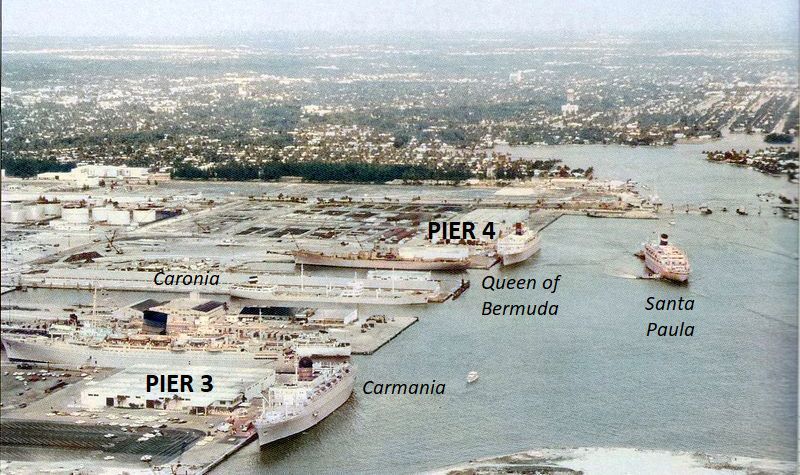 Port Everglades in Fort Lauderdale and Hollywood, Florida, opened for cargo business in 1928 and welcomed its first passenger ships in 1931 when the United Fruit Company Talamanca and Pastores called on their voyages between New York and Central America. The port received only occasional cruise visits in the 1930's by several well-known liners such as the Cunard Caledonia, Panama Pacific Colombia, Canadian Pacific Duchess of Richmond and Holland America Volendam. Through most of the 1940's, passenger service was interrupted by World War II and its aftermath.

The first regular passenger service commenced in October 1956 when the Portuguese flagship Santa Maria opened a new route from Lisbon to Port Everglades via Spain, Madeira, the Canary Islands, Venezuela, Curacao and Puerto Rico. In 1958, a total of 14,872 passengers were handled by the port, all at the Pier 4 Terminal (present site of Cruise Terminal 2).

By the start of the 1960's, the introduction of jet aircraft threatened the end of the ocean liner business. Shipowners soon deployed their fleets on cruises in the winter off-season, and Port Everglades 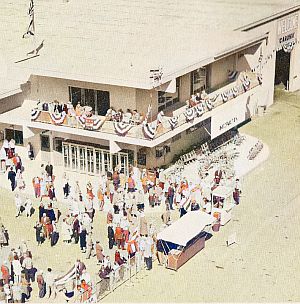 was a natural home port within easy reach of sought-after sunny destinations in the West Indies and Latin America. A second passenger terminal (now a container facility) opened at Pier 3 in 1960, and 57,014 passengers passed through the port. A third terminal also at Pier 3 (present site of Cruise Terminal 18), opened in 1964 and the passenger count nearly doubled to 105,469.

As of 2019, Port Everglades had eight cruise terminals capable of handling the largest cruise ships. It is one of the top three cruise ports in the world (the others being Miami and Port Canaveral) and peaks at over 50,000 passengers in a single day. Annual passenger count is now about four million.

There were five cruise ships based at Port Everglades for the full 1963/64 winter season, including Carmania, Franca C (which began cruising from the port in 1959), Hanseatic, Queen of Bermuda and Riviera Prima. The comfortable little Ariadne and the French Lines' flagship France each also made one cruise from Port Everglades.

The attractions of a cruise were the same as now .. food, service, relaxation, charming ports, entertainment and fun. Some of the most popular destinations included Nassau, San Juan, St. Thomas, Barbados, Martinique, La Guaira, Kingston and Port-au-Prince. Notably Grand Cayman and Cozumel were not found in any itinerary until the 1970s and 80s.

Starting July 1958, Grace Line's new luxury liners Santa Rosa and Santa Paula began calling at Port Everglades every Tuesday as part of their continuous two-week circuits from New York to Venezuela and Caribbean ports. They could be booked to and from intermediate ports, but most passengers enjoyed the full cruise. Moore McCormack's Argentina and Brasil occasionally included Port Everglades on the regular service between New York and the east coast of South America.

Several ships operated regular routes calling at Port Everglades as they linked faraway destinations to the east and west. The Santa Maria linked Lisbon and Florida once every month with intermediate calls at European and Caribbean ports. The New Zealand Shipping Company's Rangitane, Rangitoto, Ruahine and Remuera connected New Zealand ports with England via the Panama Canal, calling at Port Everglades on every eastbound sailing. The Greek Queen Frederica made one call to embark passengers for Greece via Mediterranean ports.

Five vessels called at Port Everglades so that their passengers could visit and enjoy the local area. They did not embark or disembark new passengers. Andes and Mauretania called on cruises from the U.K., Italia was on a cruise from New York to the Bahamas and the British liners Reina Del Mar and Southern Cross called during longer line voyages.

For a look at these and over 100 other ocean liners in service during 1966, see our affiliated website, LastOceanLiners.com.

Select a month or ship ABOVE for sailing schedule.