The year of 1958 was very exciting for air travel, as the world awaited the jet age. There had already been a false start in 1952 when the British Comet 1 jetliner proved to have fatal aerodynamic flaws and was withdrawn from service. On October 4, 1958 the redesigned Comet 4 flew for B.O.A.C. (below) from London to New York, establishing the first commercial transatlantic service by jet aircraft.

Not to be outdone, on October 28, 1958, Pan American World Airways introduced the Boeing 707 (above) from New York to Paris. As the public heard about the speed, comfort and prestige of jet travel the major airlines placed massive orders for the first generation of jets. 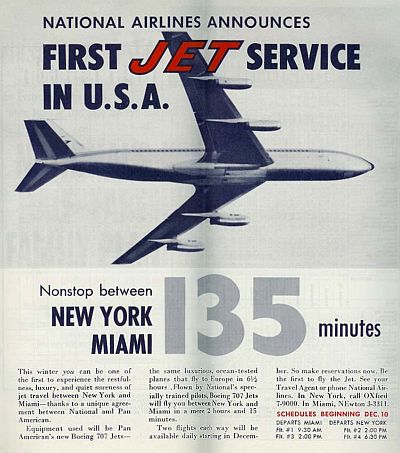 Florida eagerly anticipated the new era, planning for another boom in tourism, and it didn't have to wait long. On December 10, 1958, the first domestic jet service in the U.S.A. was inaugurated when National Airlines chartered two of Pan Am's Boeing 707's to fly the New York to Miami route for the winter season.

Discover the eight domestic and eight international airlines serving Florida with the first generation of jet airliners in airlines and aircraft from 1958 to 1963.

You can also browse and interact with the complete and authentic Florida jet timetable for January 1963.