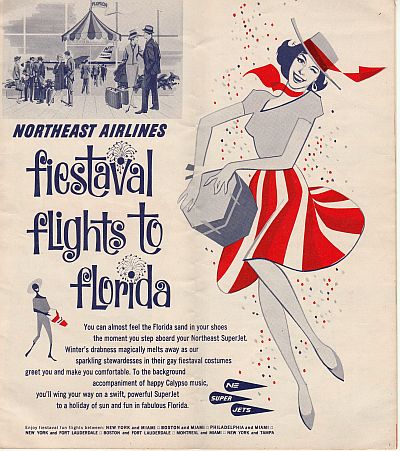 Northeast Airlines leased a single Boeing 707 from Trans World Airines (TWA) to begin jet service to Florida in the winter of 1959-60. Subseuqently they leased six Convair 880 jets from TWA in 1960 for year round operation on the routes to Florida. In 1961, they became the first carrier with scheduled jet service to Ft. Lauderdale and Jacksonville. Finally in 1962, Howard Hughes, who owned TWA, acquired control and by 1963, the Convair 880's were operating 15 daily flights each way linking Montreal, Boston, New York (Idlewild) and Philadelphia with Jacksonville, Tampa, Ft. Lauderdale and Miami.

Go to Northeast Airlines timetables or select schedules by aircraft below: