Eastern Air Lines was a major American airline from 1926 to 1991. It dominated the majority of air travel markets from the east and midwest to Florida from the 1930's to 1960's.

In 1960, Eastern Air Lines' first jets, the Douglas DC-8-21 "Golden Falcon"s, were introduced on the longer flights like the non-stops from New York and Chicago to Miami. In December, they became the first airline to offer jet service to West Palm Beach. 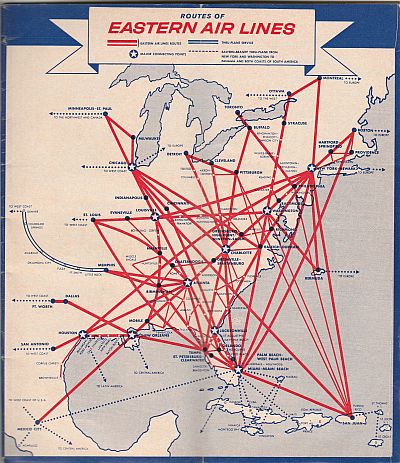 In 1962, they received their first Boeing 720 jets, which were more suitable to shorter and leaner routes. By January, 1963 the jet network offered up to 42 daily flights each way serving Florida making Eastern Air Lines by far the state's biggest passenger carrier. The route system extended from Chicago and the midwest, Boston and the northeast and from a hub in Atlanta to Jacksonville, Orlando, Tampa, West Palm Beach, Ft. Lauderdale and Miami. Propeller aircraft such as the DC-7-B/C, Martin 404 and Convair 440 were retired by 1966. Prop-jet Lockheed Electra's were kept for a while longer as back up aircraft for the Eastern Air Shuttle in the northeast.