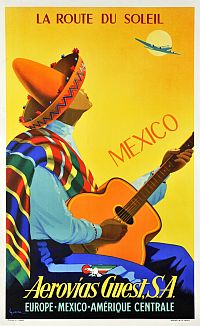 Guest Aerovias Mexico joined the jet age in 1961 with two de Havilland Comet 4C's from Mexicana taking over the transatlantic and Miami service. By January, 1962 European service had been temporarily discontinued, but the remaining flights to Miami and South America were operated by the Comets. Within a year, a Douglas DC-8-50 jet was obtained from Aeronaves de Mexico to operate six weekly Mexico City - Miami flights. In April 1963, European service resumed with four weekly DC-8 flights on the Mexico to Miami sector, of which three continued nonstop to Madrid and on to Paris. In the fall, Guest Aerovias Mexico was fully merged into Aeronaves de Mexico.

Go to Guest Aerovias Mexico timetables or select schedules by aircraft below: