Passenger ships calling at Miami as late as the 1960s generally were leftover from a much earlier era. Though at the end of the decade Miami would become by far the world's busiest cruise port, in the early 1960s cruising from Miami was yet to catch the public's interest. With some irony a deadly fire at sea on one of the old ships created the momentum to build entire fleets of new cruise ships like never before. 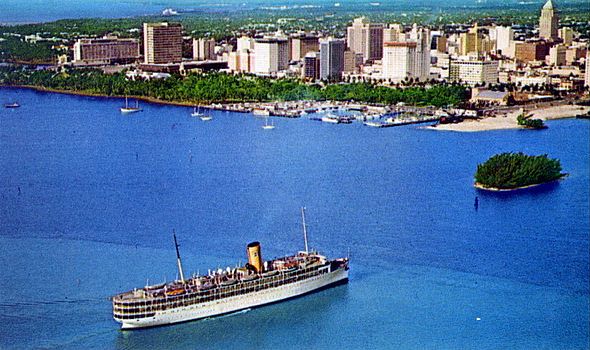 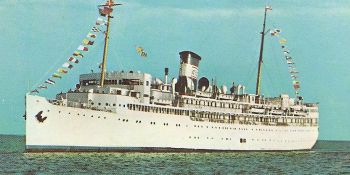 This ship and sister-ship ss Evangeline began occasional winter cruises from Miami as early as the 1930s, running line voyages between New England and Canadian ports in the summer except for service as army transports in World War II. In 1954 they were finally sold for service as cruise ships under the Panamanian flag with Eastern Shipping Corporation, owned by F. Leslie Fraser and Miami became their permanent base. Yarmouth was renamed Yarmouth Castle because she was "fitted like a castle", although mainly it was the name that changed. 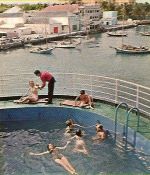 The government of the Bahamas agreed to make Yarmouth Castle their "official contract ship" and so she was renamed Queen of Nassau, sailing three and four day Miami-Nassau cruises. The contract was not renewed, and so in 1956 Eastern renamed her Yarmouth Castle, had her upgraded with an aft swimming pool, air-conditioning in public areas and a general refurbishment.

She was again given her original name of Yarmouth for some cruises from Boston to Yarmouth and in 1958, air-conditoning was extended throughout the ship and capacity reduced to 365. There were 186 cabins including 68 with a private or shared bathroom. Public rooms included a dining room, lounge, cocktail bar and small ballroom.

Eastern added two more ships to the fleet, Bahama Star in 1959 and Ariadne in 1961, so Yarmouth was sold to the new "Yarmouth Cruise Lines". She sailed a series of cruises from San Francisco and Victoria BC to the 1962 Seattle World's Fair, then returned to Miami to compete directly with her former owners on three and four day cruises from Miami to Nassau and Freeport. Following the disaster of her sister-ship, there was little that could be done to counter the concerns of the public over fire safety, and she was laid up in 1966. Understandably, she never cruised from the U.S. again. 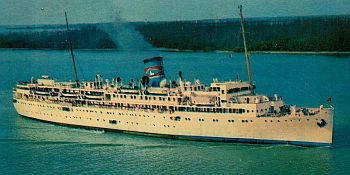 Evangeline shared a similar early history with her sister-ship ss Yarmouth, frequently assigned to the Boston-Yarmouth route. After World War II, Evangeline was converted to a cruise ship and in 1954 she was also sold to Eastern Shipping Corporation, and based in Miami. The neat little ship was given an aft swimming pool, air-conditioning was installed in all public areas and 50% of cabins, and capacity was limited to 350 guests. Of the 186 staterooms, 74 included some kind of private bathroom facilities. Evangeline offered mainly 4, 7, 10 and 14-day cruises from Miami to Cuba and the Caribbean. Being a great success, she was completely air-conditioned in 1957.

After a brief layup, Eastern sold the Evangeline in 1963 to the same company as Yarmouth, who then renamed her Yarmouth Castle. First she was chartered for cruises from New York to Nassau in 1964, but she was unable to satisfy the terms of the charter. For a few years the sisters operated in tandem, with sailings from Miami to Nassau and Freeport every Sunday, Monday, Thursday and Friday. But it all came to a horrible end on the morning of November 13, 1965 as the Yarmouth Castle passed near Great Isaac Light enroute from Miami to Nassau.

A fire that started in unoccupied cabin #610 went undetected until it was too late. The bridge burned before an alarm could be given, and the Captain left on the first boat. Chaos prevailed. The paint that had been layered on the ropes and davits over the years made it difficult for the poorly-prepared crew to launch lifeboats. In the end 89 lives were lost when the Yarmouth Castle went down shortly before dawn in over 20,000 feet of water. 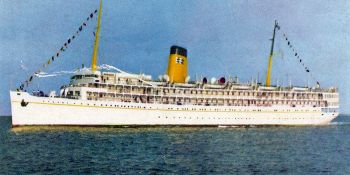 The P&O (Peninsular & Occidental) Steamship Company owned this long-serving liner and operated her from Florida throughout her 37-year career, except for 4 years in World War II. Originally the ss Florida connected Tampa, Key West and Havana. In 1934 service was transferred to a Miami-Havana route; in 1954 a weekly Miami-Nassau roundtrip was tried briefly to compete with Eastern Steamship Line, but the Florida reverted to three weekly Miami-Havana round-trip sailings.

She was transferred from American to Liberian registry in 1955 in response to costly American labor problems. Finally in 1959, with growing unrest in Cuba, the Florida was permanently assigned to twice weekly Miami-Nassau cruise service until her final layup in 1966.

Most of the 196 staterooms had an upper and lower berth and wash basin. Some triples also had a sofa bed, and a few were quads with an additional upper berth, with only about 42 cabins having some kind of private bathroom. Public rooms included a dining room, cocktail lounge and small ballroom. ss Florida was easily the most spartan of the cruise ships sailing out of Miami. Nevertheless, there were loyal fans who wouldn't think of sailing on a different line. 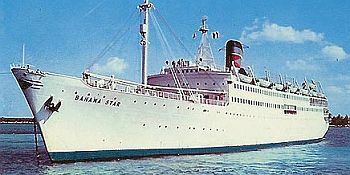 The success of their earlier ships prompted Eastern Steamship Lines to look for a larger vessel. At the time, the Arosa Line had their transatlantic liner Arosa Star up for bankruptcy auction, which Eastern acquired for only $510,000. The ship had originally sailed between New York, San Juan and Ciudad Trujillo as the Borinquen and later Puerto Rico. She was renamed Bahama Star and placed in service sailing every Monday and Friday from Miami to Nassau. She was refitted with complete air conditioning, 55 cabins with private, partial or shared bathroom and 192 cabins with wash basin only. 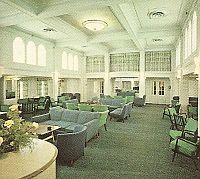 Bahama Star became very well known and popular, even without a swimming pool or extensive sun decks, based on good food, attentive service and innovative entertainment. Eastern boasted she was a "former transatlantic liner" and "the largest cruise ship sailing year round from Miami". After her last refit, public rooms included the main dining room, Star Lounge, Bahama Salon, the Calypso Club and a small game room.

Bahama Star is perhaps best remembered for her role as the primary rescue vessel in the sinking of the Yarmouth Castle. Captain Carl Brown brought his vessel within 100 yards of the flaming ship, lowered 12 lifeboats and rescued 373 passengers and crew. Ironically, the tragedy led to adoption of the 1966 fire safety requirements, which forced older ships like the Bahama Star out of service by 1968.