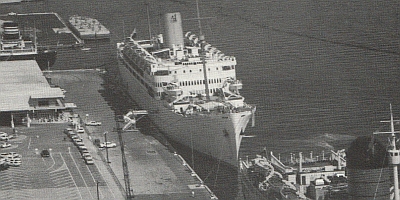 Originally built for England to Argentina service, she had a loyal following who also enjoyed her occasional all first-class cruises. In 1959, the club-like liner was converted into a fine, full-time cruise ship catering to the British market, and the schedule was expanded to worldwide cruising. Winter cruises from England calling at Port Everglades stayed on the schedule until she was retired and scrapped in 1971.