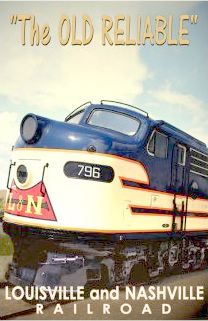 1949 The Gulf Wind was inaugurated as Louisville & Nashville's first streamliner to reach Florida using their own rails. Between New Orleans and Chattahoochee it ran on the L&N, then continued on the Seaboard to Jacksonville. The Gulf Wind consist was usually two coaches, two sleeping cars, an L&N diner between New Orleans and Mobile and a Seaboard diner between Chattahoochee and Jacksonville. One of the sleeping cars was either the "Royal Canal" or "Royal Street", equipped with a buffet lounge section. They were L&N's only round end observation cars.

1953 Florida was still primarily a winter-only vacation destination so the January 1953 timetable had no less than six daily departures over the Louisville & Nashville. The fleet included three streamliners and three heavyweights, as detailed in these extracts from the Official Guide of the Railways:

About color schemes: The image of L&N #454A and the colors on this page show Louisville and Nashville's royal blue, cream and red styling for passenger trains.